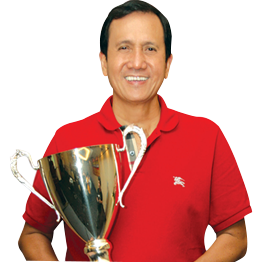 In the past 25 years of cockfighting in the Philippines, nobody else has won more “Cocker of the Year” awards or has won more fights in the sport than Patrick “Idol” Antonio.

Consider these statistics: 8 cocker of the year awards (5 NCA and 3 UCAP), over 14 runner-up finishes for the cocker of the year award, over 250 big time derbies won including 4 World Slasher championships), and the highest winning percentage in the sport today. No other cocker has garnered as many championships or has won as consistently as Patrick Antonio has in the past two decades.

Like in any other sport or endeavour, there will always be some envious naysayers who will try to deny credit to a person’s success. With another 8th World Slasher Cup Trophy for 2018, Patrick Antonio continues to prove any doubters wrong and further cements his place as one of cockfighting’s greatest of all time.

Many people have written Patrick Antonio or have emailed him asking to know what his secrets are. When asked what his secret for success is, he answers, “I have already shared most of my secrets. I have always enjoyed helping other sabungeros as away of giving back to this sport that has given me so many blessings.

Fortunately, I have been able to do that through my television show and through Sagupaan Superfeeds. Over and over again, my use of Sagupaan products continues to give me winning results.” He adds,“I feel great with the many cockers that have written, called, or texted me, letting me know how my methods and/or how the use of Sagupaan Products has helped them win more in cockfighting.” However,Patrick Antonio admits that of course there are a few secrets that he keeps to himself. “I share about 99% of what I know about cockfighting with the public. However, there is that 1% that I keep to myself that not even my own sons or farm personnel know about,” he says with a wink.